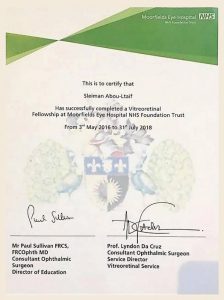 The Lebanese ophthalmologist, Suleiman Abu Latif, a graduate of the Faculty of Medicine at the Lebanese University was awarded in 2003 the fellowship of the Royal College of Ophthalmologists in Britain, the highest title in the ophthalmology profession worldwide, after passing a number of oral and written examinations. This accomplishment was obtained after achieving the degree of “Retinal Network Fellow” of Moorfields Eye Hospital, the largest eye specialist hospital and the most advanced globally.

In 2011, Abu Latif, who specialized in retinal diseases and surgery, received a membership and diploma from the Royal College of Ophthalmologists in Britain. He presented a series of lectures at the conference of Euretina, the European Society of Retina Specialists, in Milan, Nice, Copenhagen, and Vienna. In addition, he has several articles in various international medical journals.

Abu Latif is thinking of a “partial return” to Lebanon through a “seasonal clinic” in which he provides medical services to those in need, as dictated by the professional ethics and the loyalty to his fellow countrymen (consultations, medical examinations, operations, etc.).

The British Royal College Fellowship of Ophthalmologists will be awarded to Dr. Abu Latif at a special ceremony in London the coming September.